The worst week of the year regarding traffic accidents just finished in Thailand. High numbers for accidents and causalities during the Thai New Year, Songkran, as always. See table below and read more in Bangkok Post here. 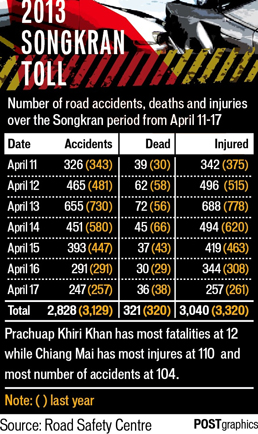 At the same time the care sales in Thailand reached new records in March. According to the Federation of Thai Industries (FTI), Thailand saw a new record of domestic car sales in March, totaling almost 157,000 units, while the number of exported vehicles also exceeded 100,000 units for the first time.

Domestic car sales remained robust in March, reaching 156,951 cars, the highest ever recorded. The phenomenon is believed to have been driven by the first-car buyer program. Out of all the cars sold in March, nearly 50,000 belong to first-time buyers and are entitled to tax rebates from the government.

Thailand’s vehicle output over the first three months of the year totaled 325,888 units, up 132% from the same period last year. Up to 256,231 units were produced in March alone.

The agency said this year’s total auto production is projected at 2.55 million units but the figure is expected to be revised up due to increasing demand.

Metropolitan police have started to take drunk driving more seriously. Apart from traffic tickets issued at checkpoints, drunk drivers will now likely face public embarrassment, as their photos will be posted on Facebook.