Vorayuth, the 27-year-old grandson of late Red Bull founder Chaleo Yoovidhya, was charged with causing the death of a police officer by reckless and drunk driving. He was subsequently released on THB500,000 bail.

During the drunk driving incident, Vorayuth allegedly banged his black Ferrari into the rear of Pol Snr Sgt Maj Wichian Klanprasert’s motorcycle at 5:30am on September 3rd. Vorayuth dragged the policeman’s body along 200 meters of outbound Sukhumvit road before speeding away to his father’s house on Soi Sukhumvit 53.

Police has denied accusations that the case had advanced at a slow pace and insisted that it had proceeded in accordance with the time limit set by the law. The prosecutors will review the investigation report, which took authorities six months to put together, as well as all corresponding evidence. They will rule whether or not to indict Vorayuth.

We will soon fins out if another rich famous person will avoid time behind bars in Thailand.

On a more positive note on the Red Bull brand. A picture I took from 2010 when Red Bulls F1 driver Mark Webber raced through the streets of Bangkok. It was a great day. Goose bumps. 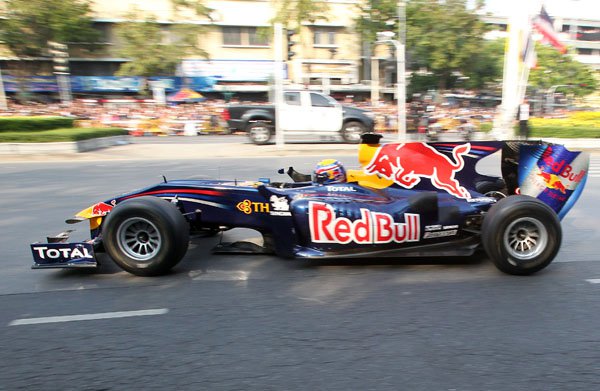